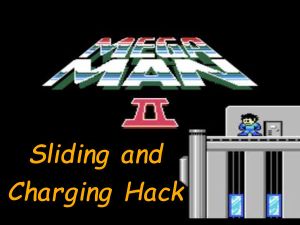 For the record, when I streamed this, I patched my copy of Mega Man 2 with the “don’t lose e-tanks at game over” patch already on and worked perfectly!

SO HOW IS IT? This hack is really well done and the new mechanics flow perfectly with Mega Man 2. It’s adding new mechanics to older games of a series like this that can change your playing experience. The sliding mechanics are based on Meg Man 3, where the slide was introduced. The Mega Buster charge is the one from Mega Man 5 and uses the same graphics from MM5.

Sliding can definitely speed things up in some areas of the game, though there aren’t a lot of spots where you would want or need to. Also try sliding for fun in the little section when you’re climbing up Wily’s Castle in Wily Stage 1! What’s also nice is you can *sorta* slide under Air Man’s tornados like you can when you fight Doc Robot Air Man in MM3.

The charged Mega Buster is the biggest game changer here. One shotting most enemies around stages is pretty rewarding and saves having to change weapons. The charge shot works excellent on the Robot Masters and Wily bosses too! Usually 4-5 charged shots will do it and many times the charged shot works better than their weakness weapon! Especially try it on the Mechadragon! I’m not sure if the charged shot works on the boo beams (I forgot to try when I streamed this), but don’t try it on Alien Wily.

Being able to change your weapons on the fly hitting select without going to the menu is a big change too. In conclusion, I do recommend this if you want a different experience with Mega Man 2!