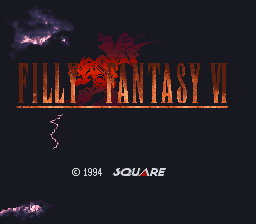 Filly Fantasy 6 by DrakeyC is a hack of FF3/6 themed around the reboot My Little Pony series. The main plot beats of FF6 remain, but everything else is changed from the heroes and villains, locations, gear, Espers and more. This hack is more themed towards fans of the MLP reboot, but anyone who isn’t a fan can still find enjoyment in it (like myself). The readme file included lists the bulk of the changes, but there is a grand database google file (link below) with all of the other changes, fixes and additions. Many enemies were changed to MLP related as drawn graphics compared to sprite work. Also worth noting this hack can tend to be on the hard side, and an easy mode patch is included. Since the list of changes is pretty long, for a preview I’ll stick to the changes of the main cast of FF6 to their pony counterparts:

With most romhacks, strongly suggested to check out the readme files for advice on the changes to hacks and any gameplay tips, especially with rpgs. Readme files for rpg hacks can contain additional gameplay advice, etc, and it’s worth subscribing to hacks you like on RHDN to keep up with updates for bug fixes, additional content, etc.