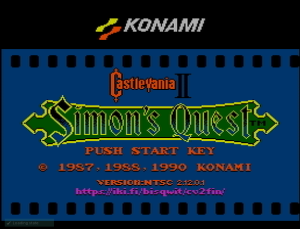 Castlevania 2, the black sheep of the original NES trilogy. Not a pure platformer like 1 and 3, but more of an adventure game with rpg elements like Zelda 2. Also made famous by the bad translation of clues and townspeople gossip which made figuring out progressing through the game harder then it should have been unless you had friends who knew what they were doing. Or Nintendo Power. And that infamous Nintendo Power cover that gave kids nightmares. I don’t have many memories of playing this as a kid except off and on renting or with friends. That said, never finished it either. I discovered another improvement to Redacted by romhacking.net user Bisqwit. He took what was done in Redacted and improved it even more! Other features include:

When I played this I added 3 other hacks to it: the Annoyance Fixes by tkempkes, False Floor & Breakable Block Replacer by Greyfield, and the Game Over Penalty Reduction by NaOH hacks (links provided at the end of this post). The Game Over one reduces the amount of hearts lost at a game over to half instead of all of them. Annoyance Fixes includes patches for a faster day and night transition, getting double hearts, empty space replacing false floors. False Floor & breakable Block Replacer changes the false blocks around the game to a different shade so you don’t have to always throw holy water around. I’ve played this hack with and without these additional patches, patches are compatible with this hack.

This review updated after a new video playthrough on 9/26 with version 2.12.0.1 of the Bisquit hack, and latest versions of the Game Over Penalty, Double Hearts and False Block Replacer hacks available. Review will reflect with and without the additional hacks.