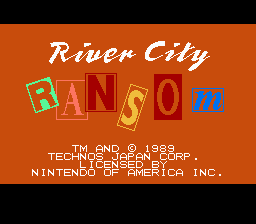 Released by Tecnos Japan in the US in 1990, River City Ransom is an open-world beat em up title with many rpg elements. It’s part of the Kunio-Kun series, which also include Renegade, Super Dodge ball, and the Crash n The Boys series. The plot involves Alex and Ryan as they fight their way through mobs of gangs to break into the River City High School to beat down the leader of the gangs named Slick and save Ryan’s girlfriend. You’ll encounter a number of mobs all wearing different shirts and some stronger than others with names like “The Frat Guys” and “The Generic Dudes”and get money from them upon defeating them and the gang leaders on your way to the high school. One funny aspect is your enemies yelling “BARF!!” upon defeat. Collected money can be used to increase all your stats along with your endurance and max health bar. Items to buy include special books to make your attacks faster, items to wear to increase your stats, other goodies, and various foods. The game doesn’t tell you what these items you can buy in the malls do, so it’s a lot of trial and error or looking up a walkthrough, or having the map from Nintendo Power. There is one path to getting to the high school and you have to fight a series of gang leaders on the way, and sometime backtrack to fight others. Fighting style is punches and kicks, using weapons, and jumping like the Double Dragon games.

SO HOW IS IT? This game is a cult hit and it shows. I wish I played this when i was a kid or teen cause it’s fun! The plot is pretty simple but it’s like the Double Dragon games as an open-world rpg! Fighting different gangs to build up your stats, fight more gangs and the gang bosses to get into the high school, beat the head bosses and Slick. That’s the name of the game. The majority of the time of this game will be grinding for money to improve your stats (63 is the max stat for everything but max power at 127). Unless you got a guide handy, you’ll be writing down and going through trial and error to see what all the food and other items improve. The password system is long consisting of symbols and upper and lowercase letters and puts games like Faxanadu and Legacy of the Wizard to shame. Having finished this twice I loved playing it both times on and off stream!

GRAPHICS AND SOUND: The graphics in this are large and colorful. Everyone is a stubby super deformed type character from your heroes to the various gangs and other npcs. Punches and kicks are depicted colorfully, and the various gang members each wear different clothes to show what gang they’re part of. The various gang members and even npcs are all mostly different: some wear glasses and others dont, or have a different shaped head. In the case of one of the high school bosses, he has giant bug eyes. The city itself is quite colorful and at the malls there’s always npcs running back and forth and the backgrounds from the streets to construction areas all have different object sin the background so it’s not just a blank space. The animation when you purchase and eat items or use the sauna is really funny and adds a lot of charm to this title.

The music is quite good! You’re gonna find yourself humming the main tune a lot as you’re going back and forth grinding for money and finding the various gang leaders. Punches and kicks sound good and enemies die and leave money clanging on the ground for you to pick up. Even the boss theme is good!

PLAY CONTROL: You got one button to punch, one to kick, hold both buttons to jump. If you’ve played a Double Dragon game you know how this controls. Jumping is really weird and you’re gonna find yourself missing some jumps to get to a higher platform often in the first factory. Picking up a weapon you can use it hitting punch or throw it for more damage with the kick button. You can get easily juggled by gang members or the gang leaders, and thrown around like a rag doll before you realize it, and find yourself needing health badly 9especially with the high school bosses). Again, like any NES Double Dragon game as an example or even the Final Fight series.

CHALLENGE: Most of the challenge here is getting your stats built up to take on stronger gang members and the leaders, then doing it over again till you max your stats out (63 for main stats, 127 for max power) before hitting the high school. Using weapons helps a lot, especially when you get the skill to use your weapon faster, along with the faster punching and kicking item. Jumping is a challenge in this as I mentioned before. Dying means you respwan at the last mall area you were at and losing half your money. There is a hidden shop with expensive items to max everything out (hint: check the underpass tunnel). You can buy various items to use right away, save for your travels, and equip to boost your stats, and they all vary. The game doesn’t tell you what does what, so it’s gonna be a lot of trial and error or finding a guide online. To get into the high school you have to defeat the various gang leaders, which is going to mean making progress through the city, and then backtracking to find others. Once that’s done, their dialogue will tell you you can get into the high school where you’ll fight someone outside. Defeating him you have various goons and gang leaders to fight on your way to the roof to fight Slick. The Dragon Twins are a tough team and you can die faster than you realize it once they get going. A nice touch is that you can attack these leaders when they’re still talking to you before they attack and get some combos off them. Near the end of your journey you’ll find a sauna at one of the malls to heal your stats a lot faster and cheaper than finding food. Always a good idea to keep healing items on you.