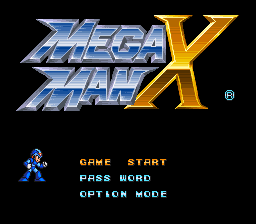 Mega Man X was released by Capcom in January 1994 in America. This is a continuation of the Mega man series, taking place in the future of the classic series. X retains the basic gameplay of the classic series with a number of improvements, along with the 16 bit graphics and music upgrades. In X, Dr. Cain discovered mega Man X sealed in a capsule by the long deceased Dr. light. X was to be sealed to insure his programing of free will would work properly and he wouldn’t turn against humanity. Cain used the basis of X to created the Reploids, robots with free will. Life was good until some Reploids turned against humanity and went Maverick, which a group led by Sigma called the Maverick Hunters were forced to fight them. Sigma eventually went Maverick and Mega Man X, feeling responsible, went out to stop the Maverick War.

Besides the graphical and music improvements, X sports a number of new moves and features. One of them being the 8 bosses you fight being called Mavericks and their names being based upon different animals and plants and are humanoid in appearance, and of course Sigma replacing Dr. Wily as the final boss. X can still gain new weapons from defeating the 8 Mavericks just like in the classic series. Another change are the upgrades to X’s helmet, armor, boots and gun which are found hidden in capsules around the 8 levels. The spirit of Dr. Light will upgrade X, the gun upgrade giving you a more powered up shot for your X Buster and the weapons you receive from the bosses. X now sports a dash move when you upgrade his boots, along with a wall jump move letting the player jump up walls and slide down them, along with doing dashes off walls themselves. Other upgrades found in stages include heart tanks which increase X’s life bar and 4 sub-tanks which replace energy tanks from the classic series. Unlike the classic series, you can fill these with energy until max, and use as needed, and keep refilling them with energy when your life bar is full. A password system like the classic series, saves your progress on fought Mavericks and other upgrades.

I never had this game, though I may try to get it now, but I did rent this and play it with friends often. Never finished it until recently, now gonna try to finish it in the ps2 mega Man X Collection. I loved the new graphics and music (the prologue stage slaps!!), along with the new abilities.

REVIEW TIME: I loved this game as a teen and replaying it now, I still love it! Finishing it finally I’ve only finished X, X2, and I think X4. The gameplay is solid and the graphics are very pretty as per Capcom’s usual high quality. The music is incredible! The story of X fighting Sigma, losing his buddy Zero during the Maverick War (the 1st of many), and X seeking vengeance from Vile and later Sigma is classic.

GRAPHICS AND SOUND: The graphics are Capcom’s usual high standard that longtime gamers know of. Very colorful and detailed, and everything even has different shades of color in them if you look closely. X, the Mavericks and other enemies stand out from the solid and colorful backgrounds. I also really like the way explosions are depicted after defeating a Maverick or other enemies throughout the stages. The music, wow! The soundtrack is a combination of rock and techno-ish and it works. My favorite tracks being Storm Eagle and the prologue stage, both of which are still iconic to this day.

PLAY CONTROL: Play control is tight, like with previous Mega Man titles and other Capcom games of the era. Really only tricky things will be trying to do wall dashes after skipping or sliding up walls to dash to the other side, or trying to get to an area for a powerup. If you’re bad at fighting games (like me) if/when you find Ryu’s Hadoken powerup might be tricky to get off.

CHALLENGE: A lot of the challenge at the start will be staying alive with a small lifebar, especially during Maverick fights. The Maverick fights take more strategy than the Robot Masters did in the classic series, and same with some mini-bosses. Like the classic series, each Maverick is weak to another Maverick’s weapon so the key is finding the order. Again trying to wall dash might be a chore, even if you change your button configuration. You’ll have to think ahead sometimes to what new ability or weapon may unlock the path to a powerup or ability, but that’s half the fun. Final fights with Sigma can be hectic.