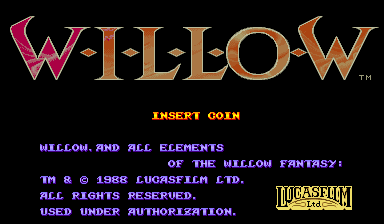 I remember seeing Willow in the movie theaters as a kid and loved it. It was a wonderful and charming fantasy movie with a likable cast, great action, and comedy. Capcom released 2 different Willow games in 1989. The arcade Willow is an action platformer title with some rpg elements with the stores. Willow released for the NES was a great action-rpg that took a lot from Zelda and titles before it. Willow was chosen by the holy baby Elora Danan to protect her. Setting off from his village and meets friends and enemies to battle the forces of the queen Bavmorda.

Arade Willow consists of 6 different stages depicting parts of the movie. You start the game as Willow himself. Willow jumps across obstacles and throwing his magic acorns to defeat enemies, mini-bosses and stage bosses. Some stages let you use the knight Madmartigan who plays more of a melee fighter considering he has a sword. The stages include: Crossroads, Cherlindrea’s Forest, Fin Raziel’s Island, Sorsha’s Camp, Tir Asleen Castle, and Nockmaar Castle. Some stages you’ll switch between using Willow or Madmartigan for the stage, with Stage 5 letting you choose one of the 2, and Stage 6 starts with Madmartigan and ends with Willow taking on the mad queen Bavmorda in one of the toughest final boss fights I ever experienced.

Shops run by gnomes with really creepy feather(?) eyebrows dot the landscape. Picking up gold from defeated enemies let you buy powerups, life bar increases (up to 6) and healing items. Willow’s powerups are more powerful ranged magics, Madmartigan’s are sword upgrades. Each powerup can be thrown at different levels by holding the attack button and charging the meter. All of Willow’s different magics consist of different types of attacks, including one the turns enemies to extra gold. The way the game works, you will need to get Willow’s best magic to even stand a chance against Bavmorda. So get to every shop you find, there’s normally 2 per stage.

REVIEW TIME: I had honestly never known there was a Willow arcade game until a few months ago when I was hunting down new MAME roms for streaming and playing on my own. Turning it on I loved it right away. Capcom hit it out of the park with the atmosphere and music, along with the enemy and stage variety. Except that cart stage at the end of Stage 2. It sucks. I had played this on stream and gotten up to the end after a lot of deaths and trying new things. I failed miserably against Bavmorda thanks to not knowing her attacks well, and not realizing how the magic/sword powerup system really worked. Watching some videos on youtube I realized I needed to concentrate more on Willow’s magic to get his ultimate magic for the final fight. Second time around after a very long and frustrating series of matches, I finally beat her and brought peace to the lands. I also didn’t realize the game had dipswitches after my first stream, so I messed with them some to give myself more of a chance, and changing the amount of lives from 1 quarter to 4. I also really wish the Brownies somehow made it into the game. XD

GRAPHICS AND SOUND: The graphics are gorgeous in Willow and hold to Capcom’s high standards. The foreground and backgrounds are very detailed and colorful, even all the enemies, human and otherwise, are bathed in different colors instead of being just one shade or color. Magic spells and Madmartigan’s attacks are very detailed as you upgrade your gear. The music is very good and fits the fantasy atmosphere of the game. Boss fight music will get you pumped up, and the whimsical tune playing when you’re sledding down the snowy hill collecting gold will make you smile. I do love the track playing fighting the final boss Bavmorda!

PLAY CONTROL: Play control is very tight. You have two buttons, one for attacking, one for jumping. Holding up as you jump gives you the high jump, and when high jumping to higher cliffs and platforms Willow and Madmartigan can climb up. Holding the attack button charges your magic or sword to one of its levels. The more magic or sword power the longer it takes to charge to max, but it’s pretty fast. Both buttons are quite responsive.

CHALLENGE: Game isn’t hard, it’s a platformer so you gotta be careful where you jump and attacking enemies. Some jumps can be tricky especially in the later levels. A lot of the challenge comes from the mini and boss fights, along with how upgraded Willow’s magic and Madmartigan’s sword are. The final fight with Bavmorda is HARD. If you don’t have Willow’s magic upgraded to the final magic Crystal, you’re gonna have a bad time avoiding her shots. Be sure to try saving your gold for the upgrades and life bar increases (up to 6, dafaq?!), get as many defensive items as you can before Bavmorda.

A friend of mine DariaPlaysRPGs also did an amazing video regarding NES Willow: https://youtu.be/A_jBj6bFoiM

I GIVE ARCADE WILLOW 4 OUT OF 5 MAGIC ACORNS!!

I wish these guys were in the game, even as a cameo.